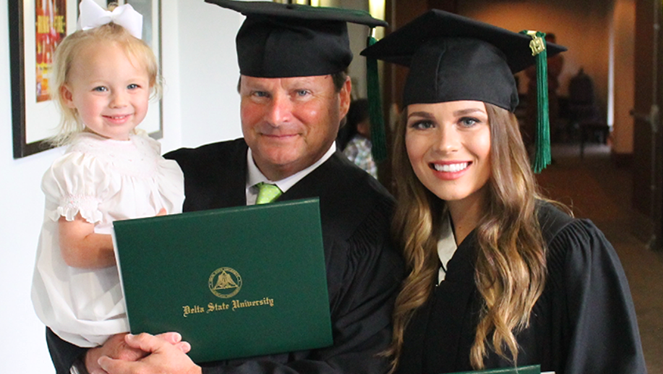 Thomas Coleman didn’t receive a degree the first time he attended Delta State University. But over two decades later, he surprised everyone when he walked across the stage on the same day as his daughter Lauren. Inspired by the academic success of the two children he raised on his own, with a little help from the Complete 2 Compete program, Thomas accomplished his goal.

“Back when I first came to Delta State, I didn’t have my head on straight,” explains Coleman. “I took a lot of classes, but I wasn’t focused.”

So he left school with no degree, and life went on. Along the way, he raised his two kids and became owner of a sandblasting and painting company. His son, Palmer, headed to Mississippi College to be a biology/pre-med major. His daughter, Lauren, was excelling at Delta State as a speech and hearing science major. With his children thriving, Thomas was motivated to finally complete his own degree.

“I watched my kids doing so well, and thought ‘If they can do it, so can I,” adds Coleman. “So I called Karen, my C2C Coach, and asked her what I would have to do to graduate with one of my kids.”

C2C Coach, Karen Bell explained the Complete 2 Compete program, and they started exploring what it would take for him to graduate. During his previous stint at Delta State, Thomas had taken plenty of marketing courses, as well as a substantial number of courses toward two other minors. But while Thomas had earned plenty of credits, he did not have enough in any single area to meet the degree requirements at the time.

“When Karen told me I had enough credits for a University Studies degree, I couldn’t believe it. I had no idea they could count credits from so many years ago,” says Coleman. “If the C2C program had existed 5 or 10 years ago, I would have done this sooner. It’s a great program.”

The surprise is sprung

With his degree coordinated, Thomas worked with several people at Delta State to plan a big surprise for Lauren. They scheduled a fake video interview for Lauren about 10 minutes prior to the graduation ceremony. As she answered several questions, she was handed a letter from her father. The last paragraph read:

You know I didn’t get my diploma in 4 years, so I decided about a year ago to see what I had to do to finish my requirements, because I would love to celebrate graduation with you and “share” graduation with you on the same day! How great would that be! And it will happen today! Love you so much, Dad.

As she read the letter out loud for the camera, Thomas, decked out in cap and gown, approached from behind and greeted her with a big hug. His son, Palmer, had raced in from one of his final exams to join the two for this special family moment.

“I’m so grateful to everyone – and so glad that Delta State has the C2C program,” beams Coleman. “How great is a program that makes it possible for a father to graduate with his daughter? This is the start of a new family tradition – where everyone gets a college degree. Next up is Palmer!”

Coleman hints that he will be putting his new degree to work by someday starting an addiction treatment center in honor of a family member.

Be the next success story

If you’re considering returning to college to complete your degree, follow Thomas Coleman’s example. Contact Complete 2 Compete – the program that helps Mississippi adults identify the clearest pathway to completing their degree. Just like Thomas, you’ll get the support of a C2C coach – who will help guide you through the process of earning your degree. And in rare cases, they might even help you arrange a graduation surprise.