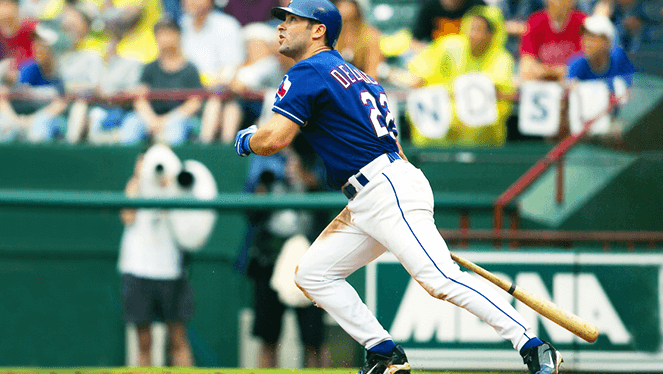 When Major League Baseball calls, you answer. And that is what David Dellucci did. After four seasons at Ole Miss, where he earned All-American honors, 10 school records, and Athlete of the Year in 1995, he was selected by the Baltimore Orioles in the 1995 MLB Draft. He naturally accepted, but his grandfather made him promise that he would finish his college degree. He never forgot that promise.

The college baseball season is long, which can make it tough to complete a college degree. For David Dellucci, named one of the 50 Greatest Athletes in Ole Miss history, the hectic baseball schedule prevented him from earning enough credits in four years to complete his degree. He had been drafted in 1994, his junior year, but elected to stay in school to try to finish his degree. It was that important to him. But even with the fourth year of studies, he still came up several credits short by the time he entered the big leagues.

Only a fraction of athletes have the skill and stamina to compete at the professional level, and David Dellucci was one of them. Over his 13-year career, he played for 7 different teams, including the 2001 World Champion Arizona Diamondbacks. Upon retiring, he started inquiring at Ole Miss about what it would take to finish his degree.

“I always felt like it was a two-way commitment between me and Ole Miss,” says Dellucci. “In return for the free education they gave me, I committed to playing baseball and earning my degree.” Between that commitment and the promise he made to his grandfather, who passed away in 1998, Dellucci was determined to get his degree.

About a year ago, he learned about the C2C program and thought it would be a good solution for him. Under the program, David was only two courses short of earning his degree. “The problem was, I have a wife and child,” he explains, “and we live in Louisiana, 5 hours away from the school, so I couldn’t attend in person. But the C2C program made it possible for me to complete my last two courses online.”

David worked by phone and email with his C2C coach Audra, who helped him select courses that would benefit him the most and still meet his degree requirements. “She was awesome. I couldn’t have done it without her,” says Dellucci emphatically. “She helped me schedule, and figure out how to navigate the online coursework and exams.”

Since he was completing his degree online, he had never met his coach in person. On the day of graduation, Dellucci, now a professional TV sports commentator, was conducting an interview when a woman approached him and asked, “Are you David Dellucci?” It was Audra. His C2C coach. She recognized his voice from the time they spent on the phone.

Dellucci is generous with his praise for the C2C program, especially for athletes who fall short of earning their degrees for a variety of reasons. And he recommends the program to everyone who is motivated to finally complete their degree.

“The C2C Program has paved the way for a lot of people to complete their degrees. Now there’s no reason not to go back to school,” urges Dellucci. “It’s so easy. Sure, there are some sacrifices, but it’s totally worth it.”

“I always knew that I needed to plan for the years after my sports career,” adds Dellucci, whose numerous charitable efforts include the Dellucci Dream Foundation that provides free baseball camps and clinics for boys and girls.

“Everybody should take advantage of this program. I did. And somewhere up there, I know my grandfather’s looking down from heaven and smiling. Because I kept my promise.”

Keep a promise to yourself

Follow David Dellucci’s example. Contact Complete 2 Compete and find out how you can complete your degree. Hundreds of Mississippi adults who have some college credits—but lack a degree—have used the C2C program to return to school, complete their degrees, and keep a promise to themselves – to take the next step toward better, brighter futures.