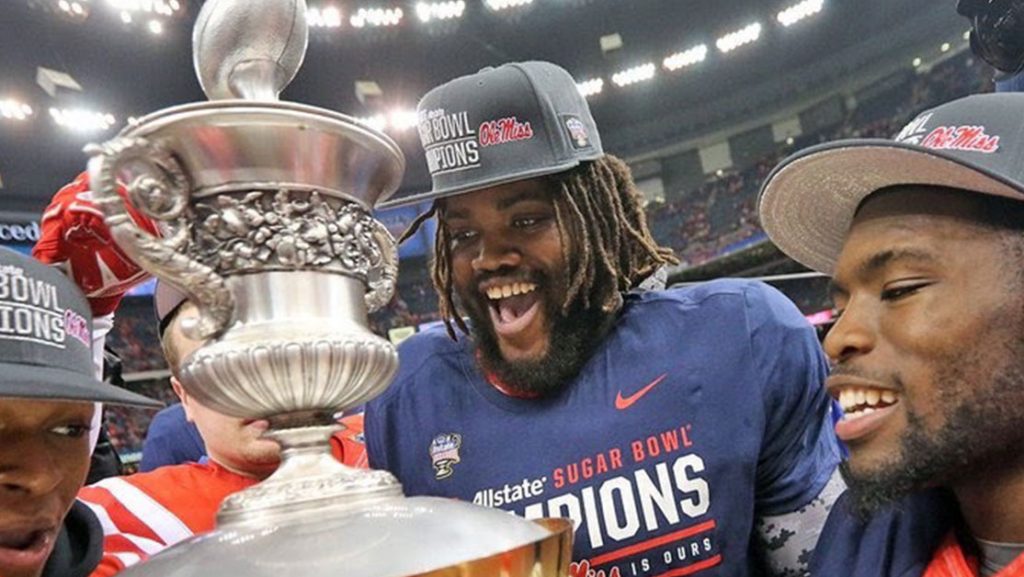 It’s easy to get distracted from finishing college. Especially when the distraction is the National Football League. But Fahn Cooper never lost sight of his goals and preparing for life after the NFL. Here’s how Fahn applied the same drive and determination he had on the football field to completing his degree.

The road to Mississippi

After graduating from Crystal Lake South High School in Illinois, Fahn Cooper took his 6’ 5”, 300-lb frame to Bowling Green University in Ohio. In 2012, he started all 13 games at left offensive tackle for the Falcons. He then transferred back closer to home to play at College of DuPage. By the end of the 2013-14 season, He was ranked as the #5 junior college offensive tackle in the nation by ESPN.com. Fahn then brought his talents to the University of Mississippi to play his final two seasons as a Rebel.

Fahn declared himself eligible for the 2016 NFL Draft and was selected in the fifth round by the San Francisco 49ers. He was officially nine credits away from his degree.

“Those nine credits were always on my mind. When you bounce around between schools, you lose credits,” he explained. “But from my very first minute in the league, I knew I needed to be prepared to support myself after football. I was always thinking ‘How can I finish?’”

Knowing he wanted to complete his degree, he stayed in touch with Ole Miss. They told him about the Complete 2 Compete program and Fahn decided to wait for the new program to take effect. He wanted to be one of the very first people to complete their degree through the C2C program. And he was.

Working with his C2C Coach Audra, Fahn discovered that he already had enough credits for a degree. He had everything he needed. And the man who now coaches others to play football gives his C2C Coach a lot of credit.

“Everybody needs coaching. Whether you’re playing football or trying to be the first kid in your family to finish college,” said Cooper. “I’m very thankful to the C2C people who gave me the coaching and support I needed. Thanks to them, I finally get to say I finished. I earned my degree. And the feeling is euphoric.”

In addition to coaching young people to be students first and athletes second, Fahn also works for a non-profit organization. He thrives on giving back to kids and the community. And just as he did with himself, he insists that all his players focus on their education.

And he remains immensely proud of the degree he earned.

“My degree shows the fortitude I have. It makes me a distinguished man. An educated man,” Fahn said proudly.

Fahn Cooper’s story is one of determination and focus. And it is a story that is similar to thousands of Mississippi adults who left college without completing a degree. For all those people, Fahn recommends contacting C2C and finding a way to complete your degree.

“Don’t let anything stop you from reaching your goal,” stresses Cooper. “The people at C2C will help you get there. Take advantage of this great program. And who knows, just like me, you might find out you already have enough credits for your degree.”

Since Fahn worked with the C2C program, hundreds of Mississippi adults who have some college credits—but lack a degree—have used the program to return to school, complete their degrees, and take the next step toward better, brighter futures.