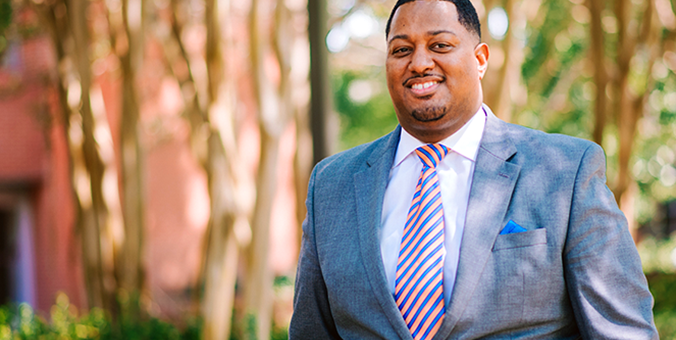 After his family, those are the true passions of Carlos D. Wilson, Ph.D., C2C Coach at Jackson State University. The lifelong educator is a born-and-raised Mississippian and a father of two who makes strong and lasting connections with the students he helps.

Growing up in Brookhaven, Carlos Wilson was the oldest of three brothers and enjoyed a pretty standard childhood. After graduating high school, he started at a military academy, but it wasn’t a fit. At age 20, somewhat old for a freshman, Wilson started down a new path by enrolling at Jackson State and earned a master’s degree in mathematics, and a Ph.D. in higher education administration.

During his journey, Wilson discovered that he had a penchant for education – a passion for helping students that would lead him directly to the C2C program. For this, he credits his mom, a long-time teacher, and librarian. “I think a bit of my mom rubbed off on me.” Dr. Wilson smiles.

A man of many passions

At the same time, he was discovering his joy of helping students, he also began arranging and producing music. “I bought a computer program on sale at Circuit City,” remembers Wilson, “and just started playing around with music.” He’s been arranging hip-hop and R&B music ever since; he finds it a stress reliever. “Looking back at some of those first pieces I did… well, they’re not the best,” he adds. “But I’ve learned a lot, gotten a LOT better, and I truly enjoy it.”

He also readily admits a love for modifying cars. His most recent project was fixing up his Infiniti G35, and he attends a few car shows every year with his friends from the car club. “Eventually, I’d like to find some more time for this,” Wilson explains, “but with a 1-year old and a 3-year old, playing with cars gets put on the back burner.”

Like music and cars, when Dr. Wilson finds inspiration in something, he pours himself into it. And his involvement with the C2C program is a prime example of that.

In 2017, he received a call that would change a lot of lives. He was asked to be the first coach for Complete 2 Compete – a new program created to help students who had previously attended college but had not earned a degree. Dr. Wilson quickly saw the potential to help even more students and he accepted. It was a natural fit.

The C2C program became very popular. “We were scrambling – even trying to get people enrolled the same week they applied,” says Wilson. “But the number of people responding to the C2C program grew at such a dramatic rate we had to slow the advertising down.”

Two years after day one, the C2C Program at Jackson State had grown almost tenfold with over 2,938 applicants, 187 total enrollments. At any given time, 60-65 students are actively enrolled at Jackson State through the C2C and more applicants every day it is showing no signs of slowing down. Now Wilson has the help of Dr. Gloria Stamps-Smith, who serves in an advisory capacity, and Dr. Junoesque E. Jacobs, who is a full-time C2C Coach.

“This is why I love the C2C program”

Dr. Wilson calls working with the C2C program “one of the most rewarding experiences of his professional life.” He explains that some students applying for the program find they have to complete several courses to complete their degree. Others discover that they already have enough credits to qualify for the degree in University Studies. That doesn’t happen all the time, but Dr. Wilson loves delivering that kind of news. So far Jackson State has helped 79 adults finish what they started and secure their degree!

“Any time we can tell someone that they don’t have to take any more coursework, and are eligible to walk across the stage with the next graduating class… this is why I love this program,” smiles Wilson. “I got to deliver that message to a man who had left college back in the 60s. Imagine finding out that you have enough credits to earn a degree when you are over 70 years old. Doesn’t get better than that.”

LaShawnda Clay was another C2C student who received that same good news. “I couldn’t believe it,” she exclaims. “Dr. Wilson worked everything out, called me up and told me I could graduate with the spring class. And all I had to pay for was my cap and gown!”

You’ve got nothing to lose

As many students as he and his team process every week, Dr. Wilson wants more. “We are totally committed to this program and the students we can help,” he says proudly. “And what I would say to anyone – EVERYONE – is to try it. We’re excited about the future of the C2C program and we are ready for you here at JSU. It doesn’t cost anything to apply and think of what you can gain. You never know what the result is going to be.”

When asked what he loves the most about helping people complete their degrees, he gives a one-word answer, “Joy.”

Be the next success story

One of the best aspects of the Complete 2 Compete program is the coaching. Students who qualify for the program work directly with a C2C Coach just like Dr. Carlos Wilson at Jackson State. Complete 2 Compete is a program that helps Mississippi adults identify the clearest pathway to completing their degree.

Contact C2C today to find out how close you are to completing your degree.